After almost three years of development, the time has come: For the first time, a robot in the experimental operating theatre of the MITI research group takes over the tasks of an "operating theatre jumper" in the non-sterile area. He fetches sterile materials - such as suture material or surgical gloves - from the warehouse, brings them to the operating theatre, opens the packaging and hands the sterile goods to the surgeon. Lukas Bernhard, a doctoral student at the Klinikum rechts der Isar of the Technical University of Munich (TUM), talks about the capabilities of the AURORA robot. [read more]

Yesterday, Benjamin Bogenberger was presented with the VDE Bayern Award in the Science category for his Bachelor's thesis at the VDE Bayern Abend 2022 at the Bayerischer Hof. The then Bachelor’s student of electrical engineering and information technology at the Technical University of Munich (TUM) has developed a solution that enables a robot to plan new paths using user guidance while reliably avoiding collisions with suddenly appearing obstacles. [read more]

On Friday, Nov 11, 2022, the MIRMI team had the pleasure of receiving Prof. Mikkel Baun Kjærgaard and the PhD student Juan Heredia from the Mc-Kinney Møller Institute of SDU, University of Southern Denmark at our research facility in Georg-Brauchle-Ring in Munich. Our guests gave a Talk titled “Software Engineering of Robotic Systems”. The presentation was followed by a Q&A session. Then we had a demo tour where key topics such as safety, data security, energy efficiency, user-based robotics solutions were discussed. [read more] 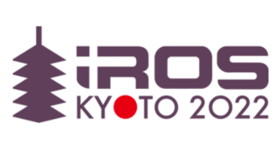 +70 researchers from several TUM Chairs will be presenting groundbreaking results on intelligent robots and smart machines at the 2022 IEEE/RSJ International Conference on Intelligent Robots and Systems (IROS), one of the largest and most impacting robotics research conferences in the world. The conference runs from October 23–27, 2022 in Kyoto, Japan. 46 publications written by different TUM Chairs affiliated with MIRMI were accepted at IROS 2022. [read more] 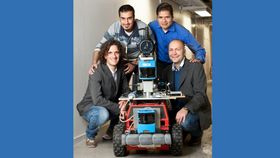 With Prof. Achim Lilienthal, one of the world's leading scientists for robots' olfatory perception has moved from the University of Örebro in Sweden to the Technical University of Munich (TUM). In his new Chair of Perception of Intelligent Systems, the focus is on robots with a sense of smell as well as mobile, and AI-enabled robots. [read more] 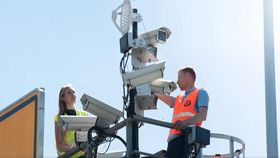 In the Providentia++ project, researchers at the Technical University of Munich (TUM) have worked with industry partners to develop a technology to complement the vehicle perspective based on onboard sensor input with a bird’s-eye view of traffic conditions. This improves road safety – also for autonomous driving. [read more] 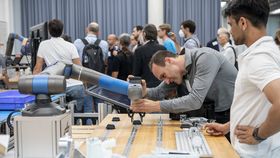 In the recently launched EU-funded Horizon project euROBIN, the Munich Institute of Robotics and Machine Intelligence (MIRMI) is coordinating the work package „Robotic Manufacturing for a Circular Economy ". In addition, MIRMI's Robothon® Grand Challenge idea is being expanded to cooperate with euROBIN’s yearly Robotic Challenges. The Chief of Science at MIRMI, Dr. Utku Culha, tells us about the tasks of researchers at the Technical University of Munich (TUM). [read more] 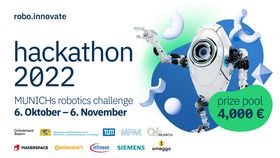 Robo.innovate and the MakerSpace will host an exciting opportunity for all robotics enthusiasts to solve real-world challenges in Munich starting in October! From 06. October on, interested students and professionals have the chance to gather in teams and address challenges from renowned companies like Continental and start-ups like Omegga. After a joint kick-off on 06. October, teams get four weeks, hardware and software as well as extensive support from experts to conceptualize and prepare a robotics solution that they can physically implement in a three days hackathon in the Munich Urban… [read more] 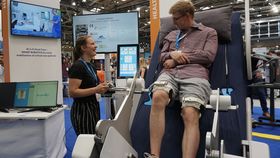 In the "Human Modeling and Rehabilitation Robotics" research group, Kim Kristin Peper conducts research on what is known as early rehabilitation. The PhD student at the Munich Institute of Robotics and Machine Intelligence (MIRMI) bridges the gap between coding, robotics and physiotherapy in her research. [read more] 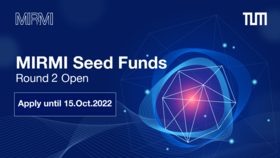 After the successful establishment of MIRMI Seed Funds in spring 2022, MIRMI opens a new call for applications to Seed Funds. MIRMI’s Principal Investigators are invited to send a joint application to community@mirmi.tum.de by 15.October 2022. MIRMI Seed Funding aims to foster further innovative, ambitious research ideas and cooperation within the Institute. [read more]